Are you planning to add more options to customize the themes?

We need the ability to change

The current colors limits the colors I can use in my logo. Also some logos need dark background so it will be also great if I can control button & background colors.

Are you planning to add more options to customize the themes?

We need the ability to change

The current colors limits the colors I can use in my logo. Also some logos need dark background so it will be also great if I can control button & background colors.

@Deepblue These changes are not currently planned but I will share your feedback with our product team.

Logo position to the right is not good!

This layout is not suitable for LifeStyle images, the details are too small:

@grant WLM loading is very slow! and sometimes the website is completely down.
This is killing WLM… I pointed all my non-premium domains to it and now thinking about reverting them back to Dan.

Urgent feedback will be appreciated

WLM loading is very slow! and sometimes the website is completely down.
This is killing WLM… I pointed all my non-premium domains to it and now thinking about reverting them back to Dan.

Urgent feedback will be appreciated

@Deepblue Looks like there was a temporary issue due to a recent server upgrade. It should be resolved now.

@grant Hey, I have an WLM listing that’s a good fit for a contest, I tried to submit it but i couldn’t. Have you thought to add this feature?

@grant WLM is messed up on mobile! Did you you test on mobile or not? (I use Professional theme )

The whole system is flawed. People can list domains that are available but I can’t suggest one of my WLM registered domains?

Yes, this function, would be appreciated.

@Deepblue The mobile issues for Professional Theme have been resolved. If you are still encountering any issues, please share the specific examples via Blue button and we will get them fixed.

We are working on several changes to simplify our Listing types, and this also includes a better integration between WLM domains and contest submissions. We will announce these updates in the next few days.

Thats great! Thanks so much for all the effort and support. Best wishes
Maddy

Please provide a facility to change the color of the buttons and links. It will help make each WLM site look unique.

@grant I have a big issue which I thought would have already been addressed. I have almost 200 names in Basic Plus and Basic which I used for contest submissions - they have all the description and settings done - an effort of many months for me. How do I move these to WLM in bulk? Support says we have to do it manually.

Isn’t there just a simple listing type change you can make in bulk so we don’t have to??
A quick fix of download and upload of details is also not provided.
Other WLM users, should I wait till WLM listings can be submitted in contests??

I don’t have a lot of these types of listings left because I dropped them but I do have a few and I still want to be able to sub them to contests. But what I would suggest to you is that if you have names that you think don’t really work that well in contests for some reason, move those to WLM and leave the others where they are for now. They do show up on your marketplace page, but of course there is the commissions issue and that is where there is a decision point. If you really believe you would be better off financially if the name were to win a contest (which for Basic listings means that you receive only the contest prize for it), then leave it. Otherwise, for searchable BP names and you are better off leaving them where they are and then decide what to do with the non-searchable bp names.

Hopefully that makes some sense and reduces the time to move them or spreads it out over time.

Please add the ability to shortlist a name in the WLM. Shortlists are important to knowing what kind of serious traffic names are getting.

ALSO: There should be no limit on possible for WLM listings since they are not competing with premium marketplace, only with our own WLM names.
Thanks!

Would it be possible for SH to add NEW ADDITIONS to the names by category? I know there is a bar with new ones there but it is not all of them. I would love to be able to promote my new additions page!
Thank you!

Just like to make an editing suggestion for the SH lander page for WLM listings. If a seller has a BIN, make offer and instalment terms active for the listing, then the QUESTIONS? box is pushed down and it creates a large void space below the about domain section 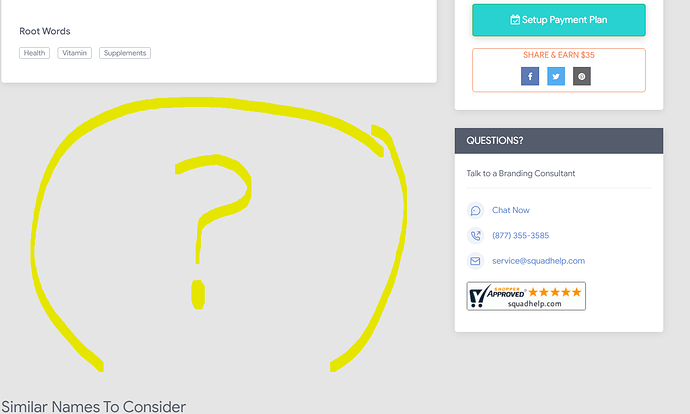